"Anastasiia Mazurok is a young musician with a great future on the world stage, her harvest of triumphs despite the young age speaks for itself". VENEZUELA SINFONICA

A native of Saint Petersburg, Russia, Ms. Mazurok was named the winner of the Russian Federation government’s award The Young Talents, and featured in the Strings Magazine as the “rising star”. Anastasiia gave her concerto debut with orchestra at the age of thirteen. She has performed extensively throughout Russia, the United States, France, and Austria. As a recipient of the Emerging Artists Foundation award, Ms. Mazurok performed Mendelssohn’s E Minor Violin Concerto at the Kimmel Center for the Performing Arts.

Ms. Mazurok is currently touring the world with America’s largest-selling instrumental artist, renowned multiple Gold, Platinum, and Grammy-winning trumpeter-composer Chris Botti. Her sold-out performances alongside the jazz legend have gotten her numerous positive reviews in media sources, calling her interpretations “delicate and elegant” and “nothing short of beautiful”.

As a featured soloist with Botti’s all-star band, Anastasiia performed in venues such as the Kleinhans Music Hall with the Buffalo Philharmonic Orchestra, PPG Arena in Pittsburg, The Jay and Susie Gogue Performing Arts Center in Auburn, Alabama, and the famous Wilbur theater in Boston, MA. In 2020 and 2022, she also joined Botti for his annual residency at the premier west coast jazz venue, Dimitriou’s Jazz Alley in Seattle, WA, SFJazz in San Francisco, CA, Blue Note in NYC, and Blue Note Tokyo, Japan. 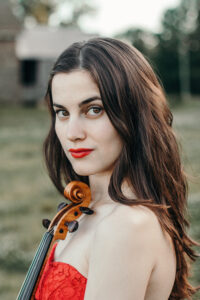 In Summer 2020, Anastasiia began a partnership with the Chopin competition’s winner, Italian pianist Niccolo Ronchi for their duo concerts in Southeast Asia and the USA (pending rescheduling due to Covid-19). Together, they recorded “The Dragonfly Suite” for violin and piano with the orchestra, written by the UK’s most well-known composer and the British Empire Medal (BEM) recipient, Alan Hackshaw. The world premiere of the suite is pending rescheduling due to the pandemic.

Ms. Mazurok is the leading soloist for the movie Protégé (2019, currently in post-production) and will be recording the soundtrack for the movie as a featured soloist with the New York Youth Symphony orchestra. She is also appearing as a guest on the third season of the Active Culture series on Riverwest Radio.

Stay up to date on exciting projects and upcoming events.